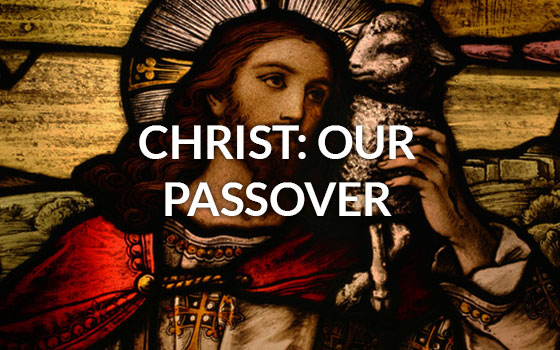 As we look as a congregation at the Passover in Exodus 11-12 we see God delivering a people, separating them from Egypt and then setting them apart as a holy people. This is done through a doorway. This door as He instructed the people of Israel was to be covered in blood:

“Then they shall take some of the blood and put it on the two doorposts and the lintel of the houses in which they eat it.  (Exodus 12:7 ESV)

As repeated throughout the narrative of Exodus, God was making a distinction between His people and the people of Egypt. This distinction becomes evident by His command followed by their obedience by faith in His command. That command was to by faith find themselves positionally “under the blood”. But, the purpose of this position was not to just deliver them that fateful night, but to deliver them continually in every practical way!

Paul in writing to the church at Corinth, to those who were sanctified and called to be saints He states in chapter 5:

“Your boasting is not good. Do you not know that a little leaven leavens the whole lump? Cleanse out the old leaven that you may be a new lump, as you really are unleavened. For Christ, our Passover lamb, has been sacrificed. Let us therefore celebrate the festival, not with the old leaven, the leaven of malice and evil, but with the unleavened bread of sincerity and truth. (1 Corinthians 5:6-8 ESV)

He is correcting the church for their arrogance and boasting. This sin had consequences amongst its members played out in a man who was not held accountable, not disciplined, loved, or confronted. Instead his behavior and sin were tolerated!  I guess the church at Corinth had the same trouble a lot of congregations do today, “they didn’t want to judge.” However Paul clearly states the rebuttal to such an attitude in vs. 12-13:

For what have I to do with judging outsiders? Is it not those inside the church whom you are to judge? God judges those outside. “Purge the evil person from among you.” (1 Corinthians 5:12-13 ESV)

So what does this have to do with the Passover? Everything! Paul states in vs. 7 that Christ our Passover lamb has been sacrificed! The issue being, if Christ has died and dealt with the penalty, power and progressively the presence of sin in the life of the church, by and through His death and resurrection, why does sin grow uncorrected amongst a called out people who are identified with this great sacrifice?

What shall we say then? Are we to continue in sin that grace may abound? By no means! How can we who died to sin still live in it? Do you not know that all of us who have been baptized into Christ Jesus were baptized into his death? We were buried therefore with him by baptism into death, in order that, just as Christ was raised from the dead by the glory of the Father, we too might walk in newness of life. (Romans 6:1-4 ESV)

So the church was responsible for this and of course the man was as well. It just revealed a greater cancer within the congregation all because they didn’t reflect, remember or respond to God concerning His covenant with them through His blood.

May we truly reflect on our position in Christ by faith in His atoning work on the cross, not forgetting that He rose to bring us newness of life! We are called to remember His death through the Lord’s table. This remembrance leads us to proclamation of the Gospel to all the world and leads us to respond as living sacrifices.  (Paul addresses the church at Corinth concerning their lack of reverence concerning The Lord’s table in Ch. 11)

We are called to be a holy set apart people. As we reflect on what God has revealed to us through His Word, may we take God’s Word through Peter to heart:

Therefore, preparing your minds for action, and being sober-minded, set your hope fully on the grace that will be brought to you at the revelation of Jesus Christ. As obedient children, do not be conformed to the passions of your former ignorance, but as he who called you is holy, you also be holy in all your conduct, since it is written, “You shall be holy, for I am holy.” And if you call on him as Father who judges impartially according to each one’s deeds, conduct yourselves with fear throughout the time of your exile, knowing that you were ransomed from the futile ways inherited from your forefathers, not with perishable things such as silver or gold, but with the precious blood of Christ, like that of a lamb without blemish or spot. He was foreknown before the foundation of the world but was made manifest in the last times for the sake of you who through him are believers in God, who raised him from the dead and gave him glory, so that your faith and hope are in God.

Having purified your souls by your obedience to the truth for a sincere brotherly love, love one another earnestly from a pure heart, since you have been born again, not of perishable seed but of imperishable, through the living and abiding word of God; for

“All flesh is like grass
and all its glory like the flower of grass.
The grass withers,
and the flower falls,
but the word of the Lord remains forever.”

And this word is the good news that was preached to you.